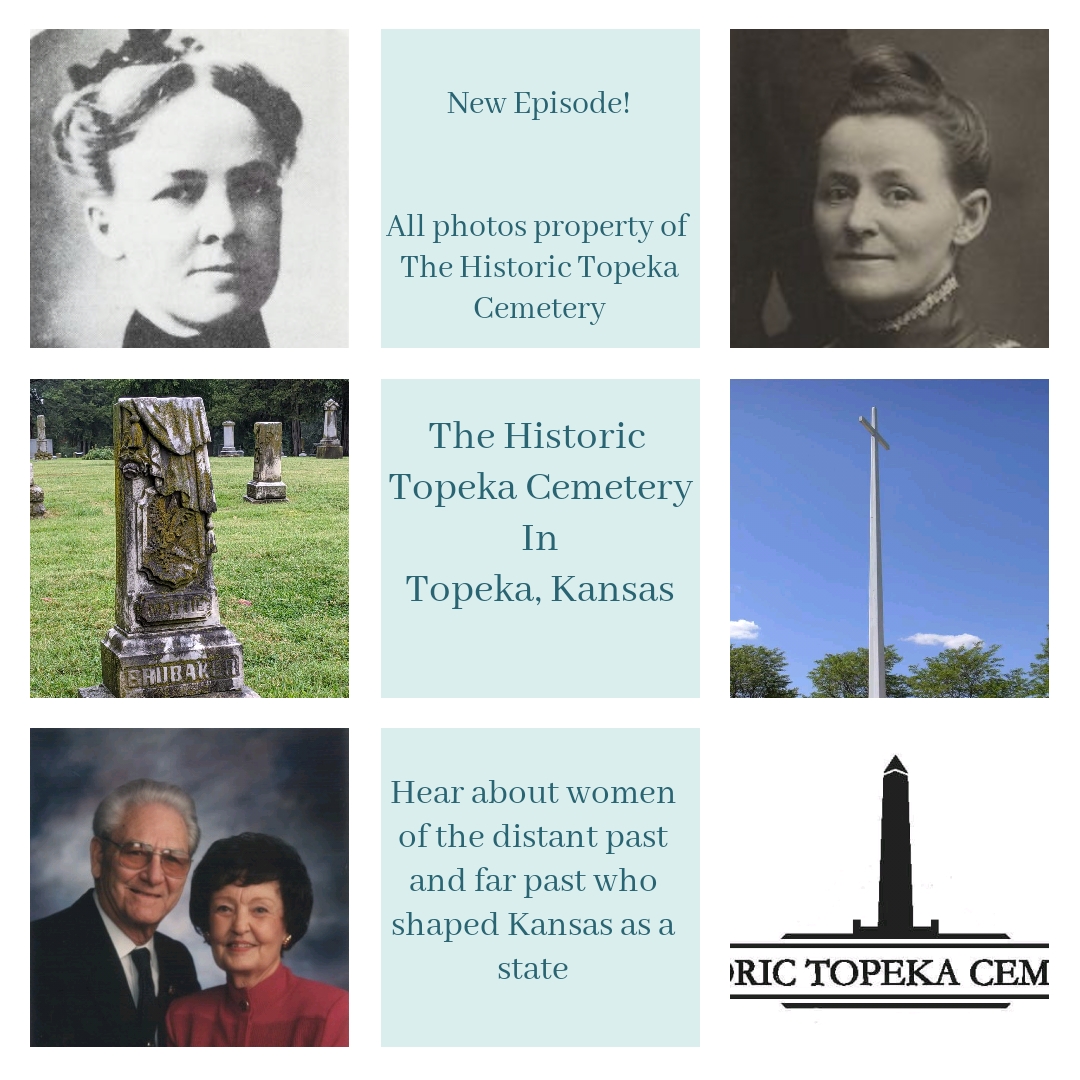 Join Jennie and Dianne as they talk with Lisa Sandmeyer, Superintendent at Historic Topeka Cemetery in Topeka, Kansas. Lisa is a wonderful storyteller as she introduces us to several fascinating women who are permanent residents of the cemetery. Some of these women include: Dr. Harriet Adams, (1867-1938), her sister Zu Adams (1859-1911) who made her career with the Kansas State Historical Society, and Hattie Freeman Tarbet (1849-1942) daughter of a freeborn-black man who built up her father's real estate investments in Topeka to become a very wealthy woman, as well as several others. Come along as we visit another ordinary, extraordinary cemetery!

Resources for this episode include:

Harriet Adams was known as a stern doctor, demanding proper behavior from the nieces and nephews who called her “Auntie Doctor.” She was more inclined to scrub a youngster’s dirty knees than offer a lollipop.

Adams spent much of her career doctoring her own family. She was the fifth of 10 children born to Franklin and Harriet Clark Adams. She graduated from the Kansas Medical College in 1894 –  the year before the school’s worst secret was made known. The cadavers students were using came from recent graves, stolen for the cash the school offered.

Topeka Cemetery never suffered such theft. The only body that ever disappeared from Topeka Cemetery was that of murderer Nat Oliphant, who had been dragged from the jail and hanged after being arrested for killing a grocer and wounding his wife in a robbery of their home in the summer of 1889. Oliphant was buried the same day as his victim, which townspeople considered further injury upon the grieving family.

The day following the burials, cemetery workers found Oliphant’s grave empty. His remains were never found, and most people believed he was thrown into the river.

The Adams family came to Kansas in 1854, the year the territory was opened for settlement. After Harriet’s mother died in the late 1880s, her father took her to a spa, where they learned the health benefits of eating Grape Nuts and Shredded Wheat over a more traditional protein filled breakfast.

Beyond family reminiscences, not much has been documented about her life or practice. She wrote for the medical society and was an advocate of temperance.

She spent the last 10 years of her career working at an asylum in Ohio, then retired to Horton, Kansas, where she lived until her death in 1938.

Harriet’s older sister, named Abzuga after a grandmother, made her career with the Kansas State Historical Society. Her father, Franklin Adams, founded the society, and Zu spent many years as his upaid assistant. She kept records from the society’s first 35 years that are of immeasurable value to the state.

The society eventually gave her a paid position with the title of librarian. Her father considered her the obvious choice to replace him as head of the historical society. But after Franklin’s death, a man announced his interest in the position. Zu backed off and became assistant to the job that should have been hers.

The historical society has available on its website one of Zu’s diaries. It includes musings about finding a candidate to run for the board of education, starting with her sister Harriett. The doctor declined, so other names were brought up, all women.

In Kansas, women had the vote in local elections beginning in 1879 and got full suffrage in 1912, eight years before the 20th Amendment was approved.

She lived in the family home and helped raise her younger siblings. She and Harriet adopted a daughter, but neither ever married. Zu died in 1911.

Both are buried in a large family plot in the central part of Topeka Cemetery.

The story of Gertrude Oakley was discovered through the sort of serendipity that comes often to us.

A couple of years ago, we got a call from Ann in Nashville. She wanted to know more about Louise Thompson Oakley. Ann wasn’t a relative. She discovered Louise in an old album of photographs she spotted in an antique shop in Savannah, Georgia. The album was leather bound with metal clasps, a beautiful piece. All the photos were captioned. Ann couldn’t resist buying it.

That led her to Topeka Cemetery, where Louise Oakley is buried with her husband, Walter, and daughter, Gertrude.

Gertrude was lost at the tender age of 23 to a brain tumor. She asked for an autopsy to be performed in the hope that doctors might learn something to help the next person who was afflicted.

They found a tumor measuring more than 7 inches wide in the center of her brain. It caused not only pain but intermittent paralysis. On her last day, the report said, “a charming smile played upon her face and continued even in death.”

None of the Oakleys has a tombstone, despite Walter Oakley’s prominence as a businessman, a member of the territorial legislature and trustee of three colleges associated with the Methodist Church. There is a prominent street in town that bears the Oakley name, though.

Another serendipitous story is that of Hattie Freeman. After a burial, we got a call from one of the mourners asking about a large monument he had seen that bore his last name, Freeman.

That led to discovery of John Freeman. John was a free-born Black man who left the south and settled in Indianapolis before the Civil War. Soon after passage of the Fugitive Slave Act in 1850, a stranger came to town and declared that John Freeman belonged to him.

The new federal law made it much easier to make such claims, but Freeman had the backing of friends, neighbors and customers, so the accuser wasn’t able to take him. Freeman was jailed, though, while his lawyers retrieved witnesses who could attest to the fact he had never been anyone’s slave.

Also taking up Freeman’s cause was the Reverend Henry Ward Beecher, whose church employed Freeman. Beecher was known for his support of the abolitionist cause by sending crates of Beecher’s Bibles – Sharps rifles, that is – to free-staters in Kansas.

Freeman came to Topeka after the war and settled down to making boots and shoes. He also dabbled in real estate, constructing a business building to rent out.

His daughter Hattie made even better use of the property and example he set. She expanded the real estate holdings, and by 1920 was one of the wealthiest people in Topeka. The newspaper speculated she was worth more than 90 percent of the white men in town. She was lauded as one of Kansas’ leading citizens.

Hattie received praise for her efforts to ensure the men in her community had jobs and skills – she hired only Black men to do construction for her.

She married relatively late in life, to a S.H. Tarbet, who had operated a very successful carpet cleaning business in Denver. They had no children.

The list of successful businesswomen of more modern times has to include Louise Hummer, who was a generous benefactor to K-12 public schools, Washburn University and Topeka Cemetery.

Born in 1919, Louise Lungstrum was the second of 13 children. She met Dana Hummer, a young police officer, when she was teaching dance at the Egyptian Ballroom in downtown Topeka. They were married in 1943 before Dana shipped out for service in North Africa.

Upon his return, the settled in Topeka and Dana resumed his career in law enforcement. He was Topeka’s police chief during its most difficult time – when an F5 tornado ripped a mile-wide swath from one end of town to the other.

The Hummers invested in property, eventually building a strip shopping center. Louise handled the business concerns, and Dana joined her in management upon his retirement.

Their only daughter, Nancy, was in her early college years when she became ill and died suddenly in 1966. The Hummers added a pool and fountain to the Topeka Cemetery grounds in Nancy’s honor. They also funded construction of a covered patio for funeral services and committals.

They erected a huge cross as a memorial to those killed in the tornado on the site where the monstrous storm first touched down – Burnett’s Mound. Vandals kept defacing it, so the Hummers moved the cross to Topeka Cemetery, where it faces the patio.

The Hummer name is on the Sports Park that is now home to football and soccer games for all three Topeka high schools and the swimming facility all use.

The Hummers also endowed a scholarship at the local university, Washburn.

Louise was a tiny woman, barely 5 feet tall. She was full of energy and always had a good word. She was still driving at the age of 95, and it didn’t scare me. In her final weeks, she delighted in talking about giving away her keepsakes to the special people in her life.

We miss her dearly.

Another among the modern heroines is Marilynn Smith, one of the founders of the Ladies Professional Golf Association.

Marilynn played college golf decades before Title Nine. That means there was no university funding to support her or any other female athlete in their endeavors. She had to buy all her own equipment, pay her own green fees to practice, and pay her way to tournaments.

She had the support of her parents, though, and her father started her on the golf course at an early age. She was a natural.

Marilynn captured the Kansas State Amateur golf title from in 1946, 1947 and 1948 and won the 1949 Women’s National Intercollegiate Golf Tournament. Then she turned pro, signing a one-year contract with Spalding for $5,000 to play in tournaments, promote golf and give up to 100 clinics a year.

It would be the first of 27 one-year contracts that she would sign with Spalding.

That first year after college also led her to join with a dozen others to found the LPGA.

In 1973, she became the first woman to work a PGA event as a television broadcaster. She was inducted into the World Golf Hall of Fame in 2006

Lucia Benton Case couldn’t vote in national elections or serve on a jury in the 1890s, but she was a bar-certified lawyer.

Lucia shared an office with her husband, Aderial Hebard Case, known as “Hib” to his friends.

One newspaper noted she tried most of the firm’s cases after being admitted to the bar in 1895, and, “She writes a good brief and makes a convincing speech to a jury.”

Hib was known for his work as a defense attorney, and he was credited with handling more than 200 capital cases in his career.

Charles Curtis, who would become vice president of the United States, learned to read the law in Hib Case’s office, starting his storied political career soon after passing the bar exam. Hib’s son, Daniel, was appointed a federal judge in the Hawaii Territory – possibly with Curtis’ influence – and Hib and Lucia thoroughly enjoyed their visits. Lucia died there in 1925 and had her ashes spread over the waters at Maui. A memorial was placed next to her husband’s monument in Topeka Cemetery.

Lucia was a leader in the suffrage movement, which had died down a bit in Kansas after women got the vote in local elections in 1879. The movement picked up steam again around 1900, and Kansas women had full suffrage in 1912, eight years before the 20th Amendment was approved.

In addition to campaigning for the vote, Lucia went on the stump for her brother in a failed bid for a seat in Congress. 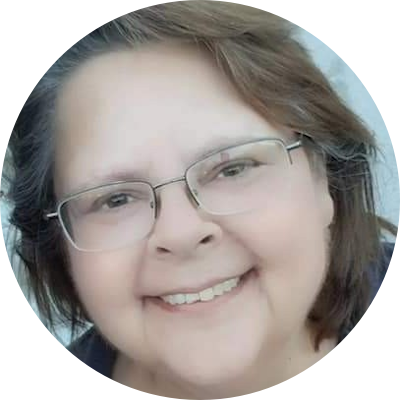